There can only be one Conan!

Conan was filled with rage as he could see the enemy banners from afar. The last hours he merely sprinted forward, approaching his contrahent, the barabarian who claimed to be Conan. Only Queen Jehnna, her Guard, Bombaata and Zula could follow (the real) Conan’s pace. The opposite army was already waiting, their heavy artillery in position and their other Conan stepped forward, accompanied by his strongest regiment including his Leader Princess Nera Bombastica (as if the real Conan would serve under somebody else) and her Paymaster.

The first cannon fired and hit Bombaata right on the head. His neck broke and he fell to the ground. Zula, who stood right besides Bombaata, faced the remaining momentum of the cannon ball and broke a leg. Luckily she was riding her horse. Conan got even more furious, but he could not move because a magical flaming cage held him back. At this moment his remaining troops arrived. The battle could begin. 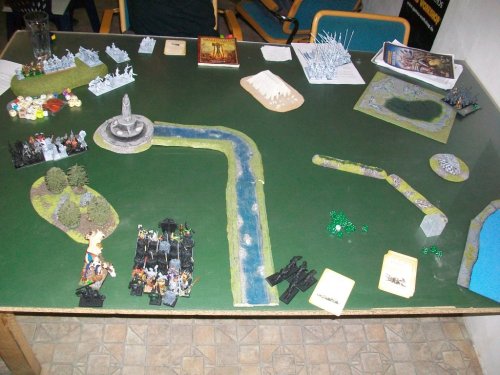 Without hesitation Conan’s Barbarians, led by Akiro, countercharged the enemy Conan as he charged forward. Akiro weakened the enemy magically, so that just two barbarians died. The other side took heavy losses, but remained steadfast. Another cannonball hit Zula and killed her. Her Berserkers did not hesitate a second and charged the wannabe Conans flank.

Akiro used his magic power to weaken the enemy and switch places with Conan. No it was time for the direct duell. Nobody can claim to be Conan without facing the consequences. Conan raised his sword and hit his imitator. Blood ran out his wound. Now came the counter, a heavy blow, which struck Conan off his feet and hurt him heavily. Before the next strike, Conan rolled to the side, stood up quickly and with a series of swift strikes chopped off the imposter’s head. This would settle the fight over the name. 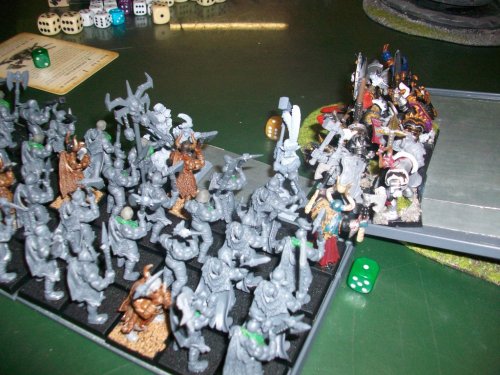 Conan had one weak moment immediatly after killing his opponent. This moment was enough and Princess Nera stabbed Conan in the side, right into his open wound.  He slowly fell to the ground, right next to the enemy Conan’s corpse. Thus ended the epic tales of Conan the Barbarian.

Also Nera’s life endet here, as barbarians and berserkers swarmed her and teared her into tiny peaces. Without leader and more importantly without hope of gratification the rest of the enemy forces ran away. 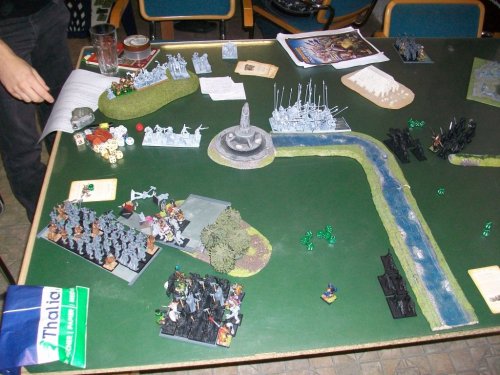 The battle was won and Jehnna’s Queendom was defendet, but Conan was lost forever. He will not be forgotten.

Conan VS the Fantasy Fluff Freakshow

Main Story
Many Winters have passed since Conan helped Jehnna to defeat her evil aunt and inherit her queendom. Conan himself reigned his own kindom already and heard seldom a word from Jehnna. But now, in her despair she sent a messanger with disturbing news. Her queendom was endangered by many perils. Scouts from all over the land reported uproar and chaotic uprisings. In the north, they say, a rich enemy assembles an army of mercenary warriors, in the east peasants prepare to riot, ugly mutant rats are digging tunnels from below and there is even rumor that huge beasts from long gone ages are walking the lands again.

Without hesitation Conan gathered his strongest warriors, took his warhounds and started the march. On his journey he met his old friend Subotai with a small troop of hunters. He was easily convinced of joining Conan on his quest. Arrived at Queen Jehnna’s palace he investigated her army. She still wore the jewel horn of the dreaming god, but instead of using it to rise a deamon, she now plays it to encourage her warriors, especially her personal guard which she herself leads to battle. By her side stood Akiro, the queens councellor and mighty wizard. Then there was Zula, captain of the royal forces, leading a troop of fierce berserkers. Even Malak, the queen’s fool and coward, gathered some men and women, against every advice to stay safe and behind. And there was another warrior, one who Canan did not believe to meet again: Bombaata. This giant human should be dead, killed by Conans own heands after betraying his companions. Jehnna assured, that since he was cured of his wounds, which would be lethal for every normal man, he was nothing but loyal to the new queen.

It was not the biggest army Conan has led in his adventurous life, but also not the smallest. If need be, he would stand alone against every enemy force, no mather how big or ferocious. He was Conan. Nothing could hurt him. Only pain.

Battle One: VS Thor Grimmfaust
The sun was shining bright as the army of Conan faced the army of Thor Grimmfaust, who marched out for brutal revenche against nasty Skaven who ravaged his beloved mine. Somehow Thor didn’t mind to attack people not involved in his conflict. Conan did not mind either, he was prepared to spill some blood.

The short legged Dwarves marched forward. So did Conan’s Barbarians, Jehnna‚s Guard, Zula’s Berserkers and Bombaata. Subotai led his hunters from the far left and tried to sabotage the dwarven cannons. But they were to late. A cannonball hit Bombaata and forced him to search shelter.

Zula found a weak spot, put spurs to her horse and charged for the fire thrower. She couldn’t destroy it fast enough and therefore got cought by some Dwarves from the side. Now was time for battle. King Grimmfaust and two dwarven regiments charged Conan and his barbarians, who counter charged. Conan challenged the opposite General and a bloody fight started. Many Dwarves and Barbarians died. Against all odds Thor could hurt Conan so badly, that he had to leave the battlefield.

Driven with insane courage after Conans defeat the barbarian fought as long as possible, even after another Dwarf Regiment charged into their side. This gave Jehnna’s Guard and the Berserkers the opportunity to countercharge the Dwarves. Wounding Conan can not be tolerated that easily. 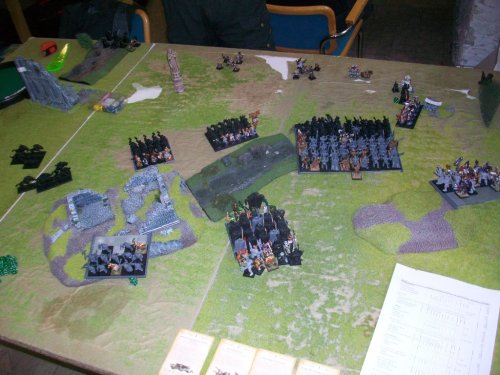 In the meanwhile Subotai had to abort his plan. It was impossible to cross the boiling flood. Also Malak had no luck. Of course he didn’t even get into close combat, because he fled at the first sign of danger.

Back to the main fight. Two dwarfen Regiments were easily overthrown. But the King himself stood steadily. He and one of his companions survived. This gave the longbeard regiment the opportunity to charge into the flank of Jehnna’s Guard. 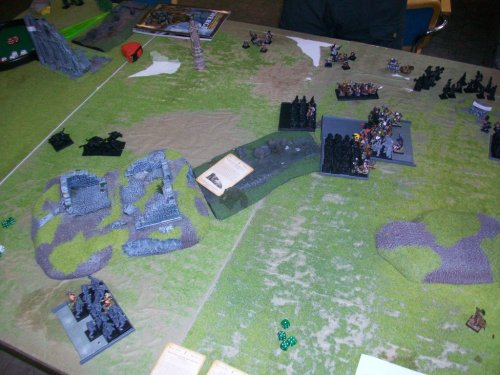 Jehnna had to retreat and all alone even the raging berserkers had to admit, that this battle was lost. But another one will come. Very soon.

Battle Two: VS Taro Kazumishi
Some miles away Conans army rallied again. They saw already their next enemies. And they were very honorable ones. Although they threatened Jehnna’s queendom, they sent a messanger with a proper challenge. They proposed a battle for Blood and Glory. The side, which can capture a proper amount of standards and/or can kill the enemy general is the winner. There was even a difficult calculation about how many standards have to be taken and how defeating the general is counted. Conan neither understood this equation nor did he want to. As long as crushing the enemy led to victory, it was fine by him. So he marched forward, the entire army with him. 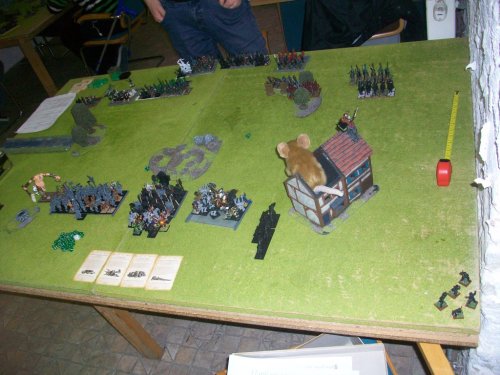 Although the so called Nippon started the battle, they were very passive. They seemed to wait for something. Maybe they had plan. Conan did not care and charged foward. At first a bunch of peasants were crushed, which cleared the way to the enemy general and his samurai, which were wiped out almost as easily as the peasants before. The berserkers on the other side of the battleline found some strange creatures called Lesser Oni, which looked somehow like deamons. At least they were not invincible.

Only Bombaata had his problems again. He engaged a strange ghost-like wolf, with a purple sun shining out their ass. Bombaata was no match for this strange creature. Neither was Malak, who had fled the battlefield already.

Conan wiped out the left flank. Zula and her berserkers did the same on the right flank. Both met in the middle for engaging the last Nippon regiments. That was not so easy. Briskily they alternatingly fled and rallied, so that Conan could not get them. At least he could avenge Bombaata and slay the ghostly wolf. 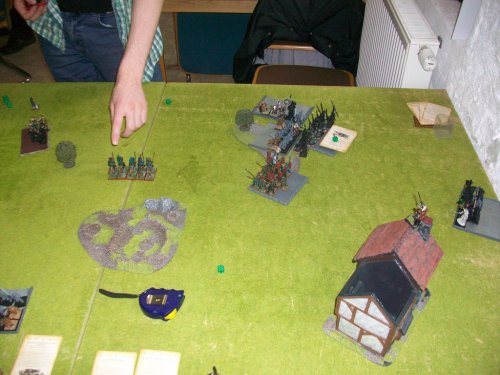 Suddenly the messanger came to Conan again. He said, that Conan fought honorably and had deserved to be the victor of this battle. After that, the remaining Nippon left the battlefield.

Battle Three: VS Mordred, „Herzog“ von Mousillon
Conan led his army further until they reached a strange encampment. There was a wizard’s tower, some glowing ruins, a strange magical statue, a mysterius sphinx with quicksand around it and a river which didn’t look trustworthy at all. Opposite to Conans army there were a bunch of people who seemed to be inhabitants, at least they used to be. The missing limbs of some and the extreme paleness of others gave Conan the shivers. How could he kill them, if they are already dead? Capturing the watchtower in the center seemed to be a good idea to gain some advantages against the many horsemen. But he could not get there, because the way was blocked by ghosts. Their faces looked somehow familiar …

The undead even had zombie pegasi with them. Subotai started a desperate attack, but could not hurt the beasts. Bombaata tried to squeeze between the watchtower and the ruins. But as he was there, his target was already somewhere else. 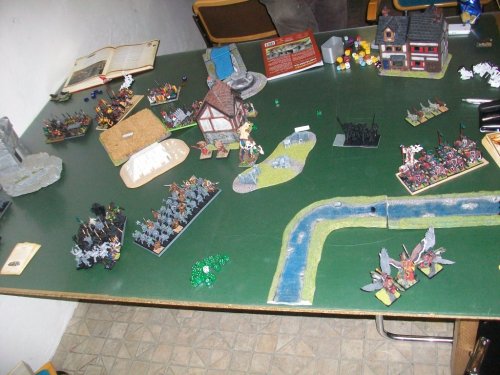 On the left side the berserkers tried to go through the wizards tower. But they could not get to the other side, so they tried the way around, which directly led to a trap, where 40 zombie peasants waited to slaughter the fierce warriors.

Akiro the wizard felt strange powers caused by the sphinx. She seemed to ask him riddles. He could not help but to answer. The sphinx was very pleased and Akiro suddenly knew many more spells, spells with devastating power. He also felt like he could slay a mighty dragen with just one strike.

He needed this powers desperatly, because the fast undead charged from all directions. On the right side vampire-like horsemen, zombie-like horsemen and the zombie pegasi charged Conan. He challenged the enemy leader, who accepted.

Conan did not lose, but his barbarians were simply slaughtered. He alone had no chance. Akiro channelled his powers and tried to cast a purple sun. He lost his control and therefore the sun killed some brave guards, so did the magical feedback of his miscast. This had been the last hope. With Undead riders from all sides, there was no other choice than run away as fast as possible.

Epilogue
The last battle cost a lot of casualties. Conan’s troops will need a while to recover. And they will. There is still one battle to fight. No one can claim Conan’s name without punishment of the only one who rightfully bears that name. 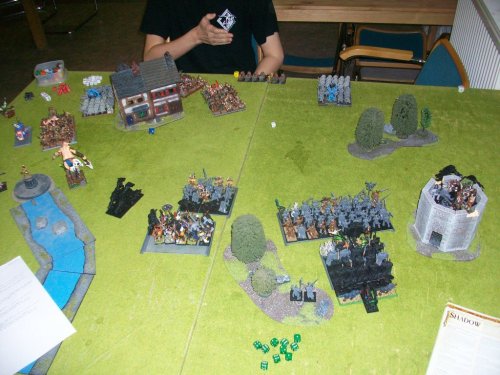 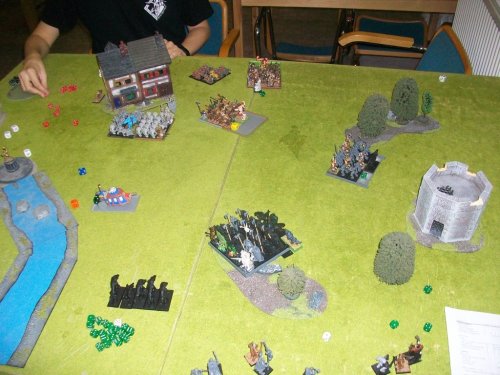 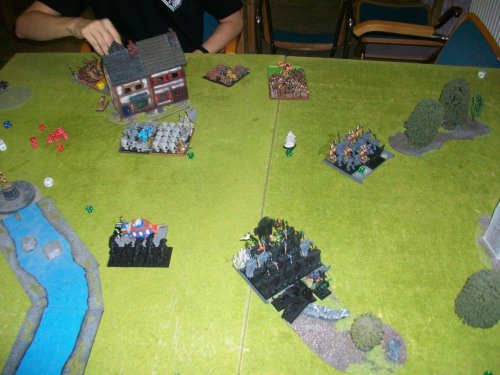 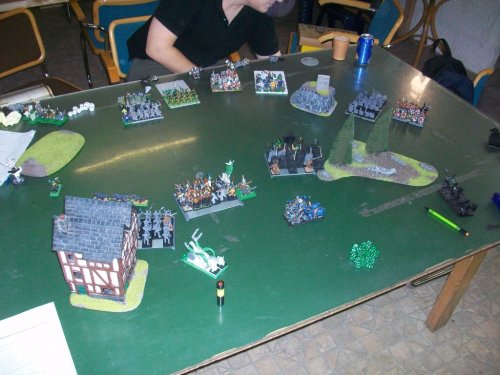 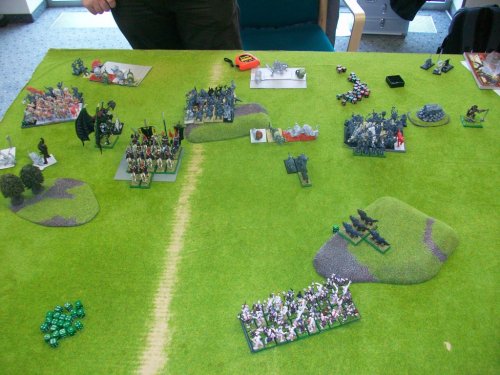 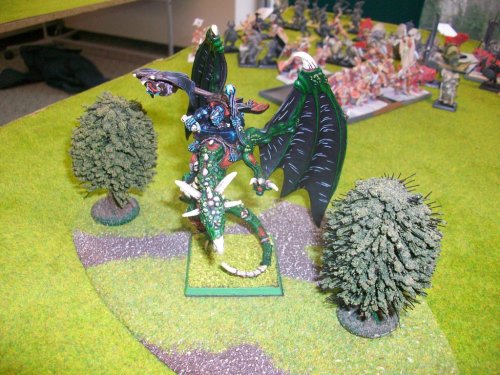