I participated in another 9th Age tournament in Steyr. I fielded the same army as on the last tournament:

Round 1: Fabian „Kathal“ Gollmann (Warriors of the Dark Gods)
My third match against Fabian’s Warriors. I lost the roll for the first turn (+3) and immediatly realised, I might have made a major vanguard mistake: The Manticore Lord got the 10 for the charge on my Direwolfes and the overrun (8) in my Phantom Hosts. 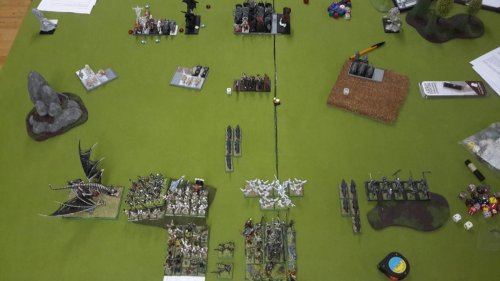 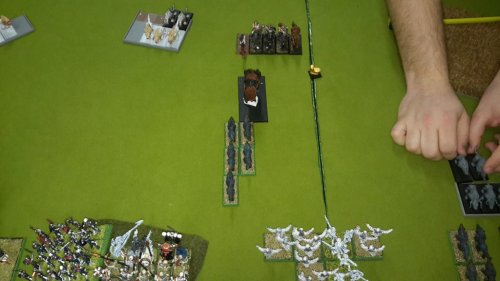 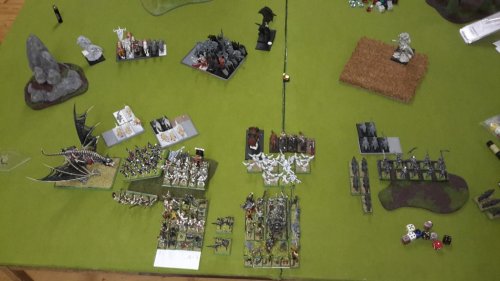 I pin the general with Zombies. On my right flank, the Wraiths deal 5 damage to the first Elder Dragon Centaur, the Shrieking Horror insta-kills the other on the left flank and dies afterwards.

I start decimating the Warriors with my Banshees before they charge my Skeletons with the second Manticore in the front and the 1 HP Elder Dragon Centaur in the flank. In the first round of Combat my general kills the Manticore. I slowly bleed Skeletons but manage to kill the Centaur and break the Warriors. 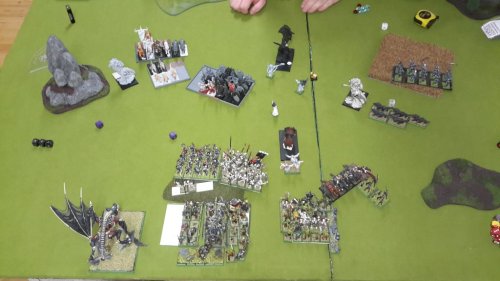 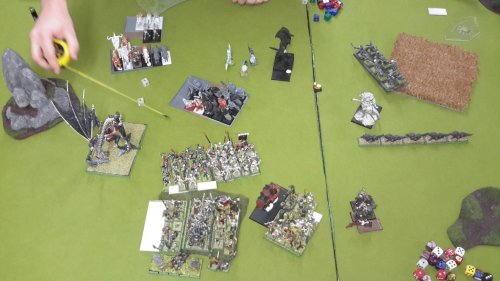 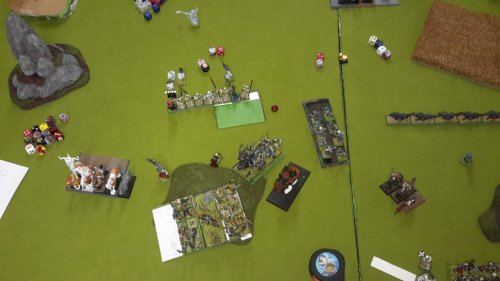 Round 2: Dolce „und“ Gabana (Sylvan Elves)
Again the same list as in the last tournament. This time with the diagonal setup and the „touch down“ scenario. My opponent deploys all first, leaving me the option to go over the right flank. I decide to go for quick points, going with my banshees after the Maidens (incl. BSB on Stag), but one survived, opening a large gap in my defences again. 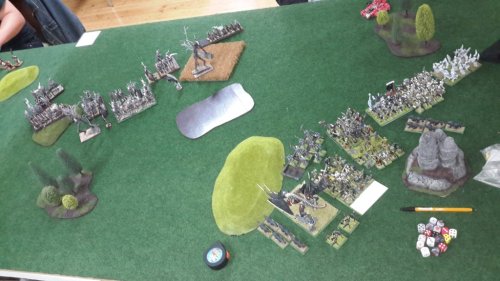 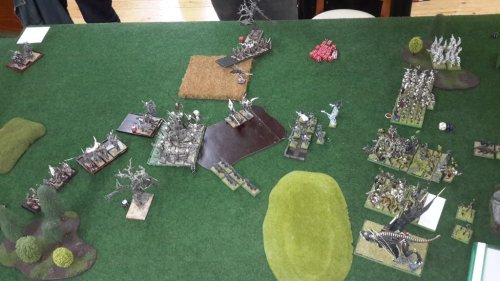 The BSB was able to charge my Zombies (with Wagon and Necros) and the Forest Prince could charge a Banshee and overrun into the same zombies on a 5. But I got lucky again, he just rolled the 4. But then my Wraiths weren’t allowed to march (rerollable 10) to kill him off. I still managed to reap him in the magic phase, but the ward saves keep the elf from dying. At least the horror inflicts two wounds.

Without the fighting elf, I can break the BSB and overrun into the Prince, killing him off with the Wagon impact hits. Also the Tree who made a supporting charge into the Zombies broke from combat. The pursuit move brings my Zombies in front of the Dryads 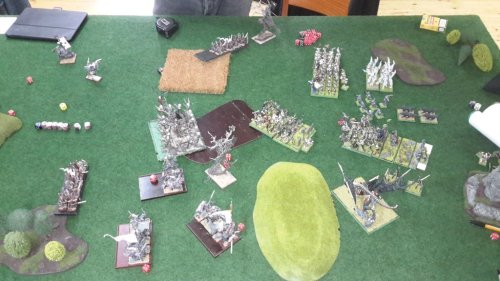 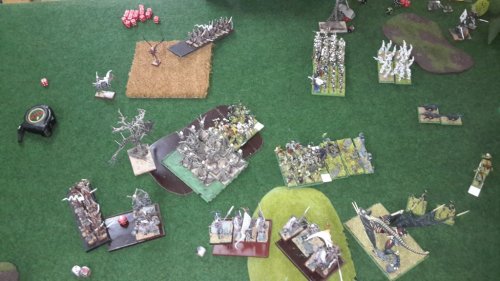 I can counter with my carrier and the other Zombies (in the flank), breaking the Dryads easily and killing the fleeing tree with the overrun pursuit move.

The rest of the game was filled with minor losses and me scoring the scenario. Again another very lucky 15:5 win. 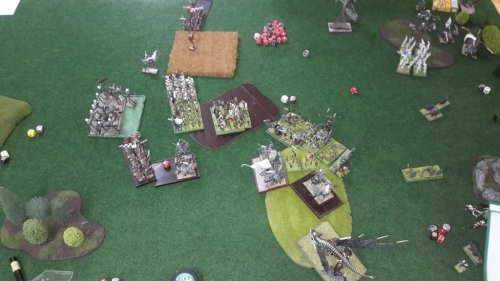 Round 3: Philipp Merlin „Kokosnuss“ Jost (Dread Elves)
Another Manticore, lots of shooting, redirectors, a Cauldron and a unit of Executioners.

I kept my distance and wanted to score via Magic. Again a mistake in turn one, where riders could charge my Wraiths in the flank. Luckily the Manticore (magic attacks) wasn’t able to get the 8 in the following round, so I killed the riders. I killed another unit of riders on the left with my Banshees. 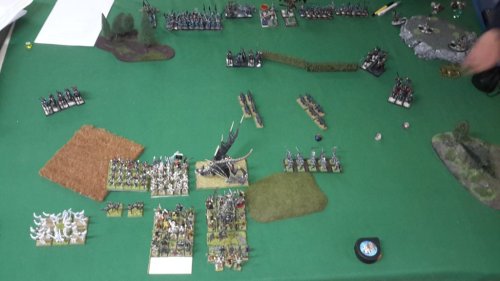 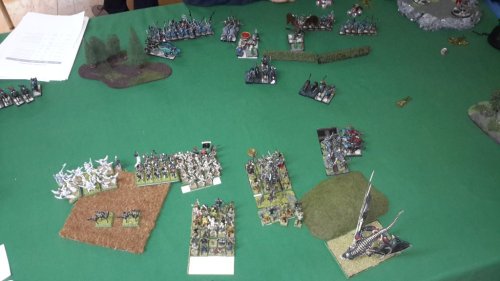 I tried to push with my Phantom Hosts against the Executioners, but wasn’t brave enough to charge. Even with a 2+ ward save, tons of attacks and multiple wounds aren’t fun. Instead I used Fire and Banshees to reduce the Elves.

I get one long distance charge with my skeletons to win the game, but fail miserably. Also the executioners fail a charge on the hosts. Then I make another mistake, letting the Cauldron kill a banshee and overrun in the bats, giving her a reform and a charge into my Wraiths next turn. 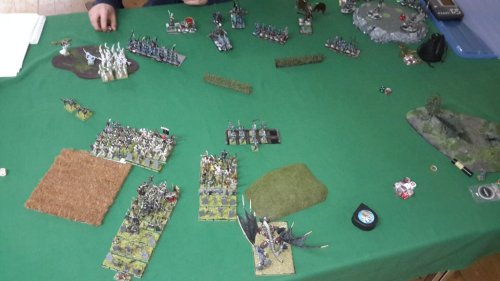 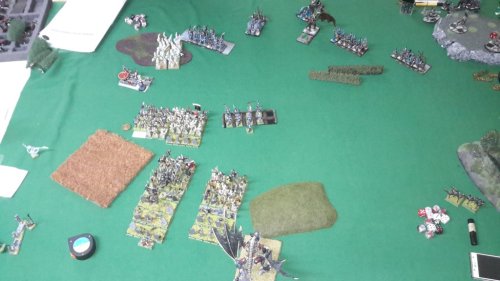 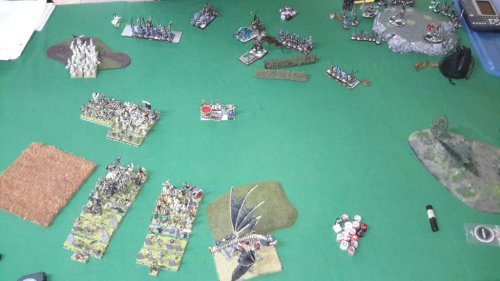 In my last turn I switch targets and try to kill off one Core unit (banner for scenario), but fail. The elves try to kill my Phantom Hosts, but my Ward saves keep me fully alive. 10:10. 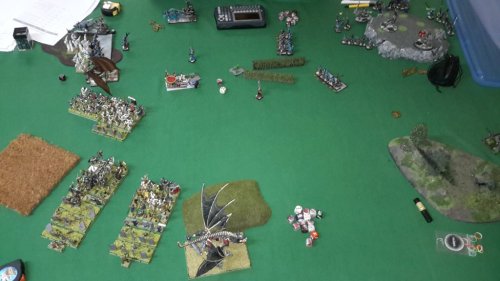 I place 9th (out of 26), which is very ok considering my many mistakes. I’m still satisfied with my list.